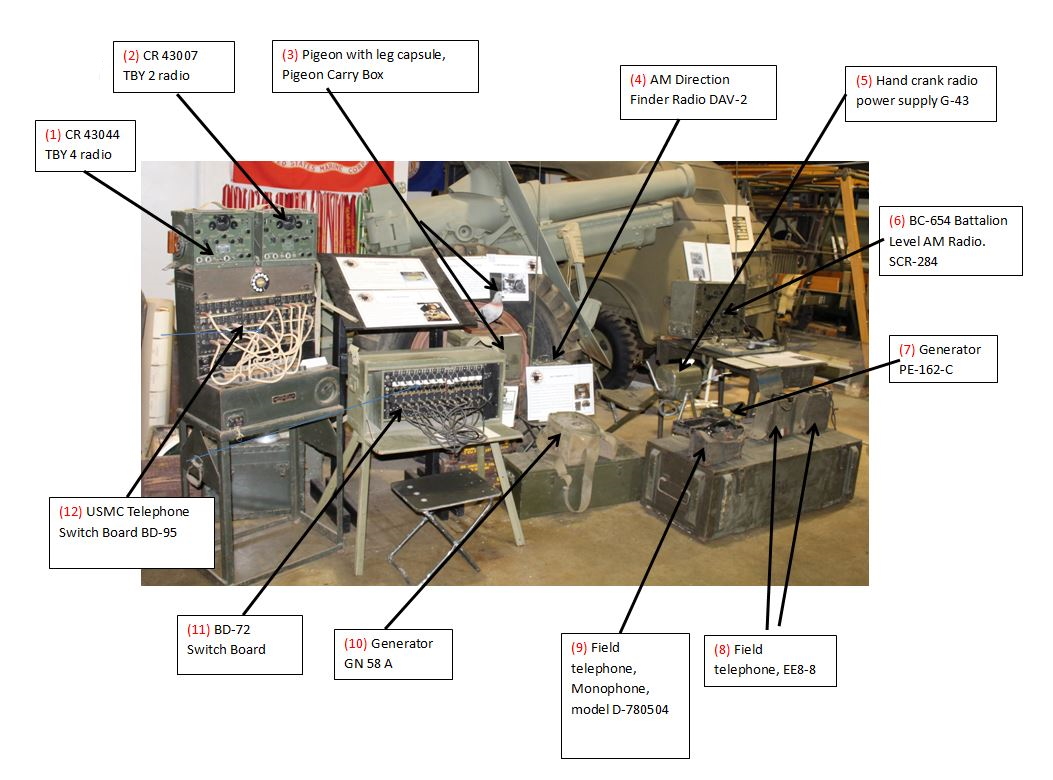 Communications Equipment used by the U.S. during World War 2; 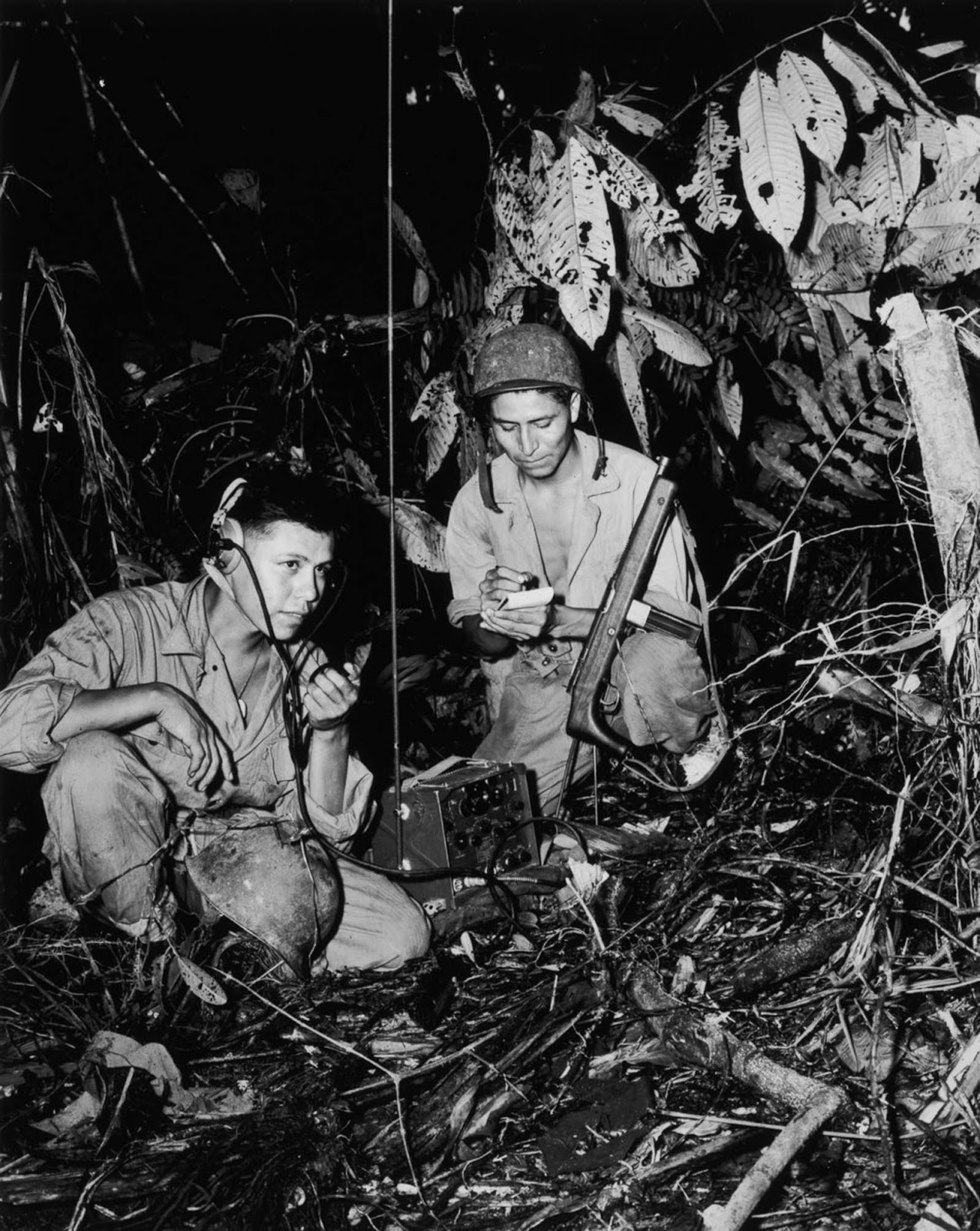 CR 43044 TBY4 Radio The TBY as used by the USMC and Navy during WWII. When carried in its canvas backpack it was slightly splash proof but still not up to the task of amphibious landings unless the individual operators provided additional waterproofing. This set was used by USMC Navajo Code Talkers. 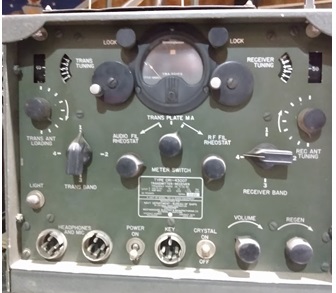 The TBY-2 CR 43007 Radio was a World War Two era transceiver used by the USMC and the US Navy. It replaced the earlier version SCR 194/195 radio sets. These radios were designed to be water resistant and splash proof and were carried on PT boats and by amphibious assault teams for ship-to shore communications. In the Pacific theater the TBY-2 was found to be vulnerable to the elements unless treated with special care. The TBY-2 operated on a frequency range of 28-80 megahertz and produced about 1/2 watt of output power when transmitting. In ideal conditions, the transmitter had a range of about 2,000 yards but less in jungle conditions. The TBY-2 was used for AM voice and CW (mores code). The TBY has a unique frequency tuning chart serialized to each individual radio, one for the transmitter, another for the receiver. The tuning chart provided the conversion from dial numbering to channel / frequency.  The radio used a total of eight vacuum tubes and carried spares inside the housing held in place with clips. The radio requires several unique voltages to operate provided by batteries: +150, +3, +1.5 and – 7.5 VDC routed to the 4 pin power connector on the bottom. Primarily, they were used by the Marines at Guadalcanal, Bougainville, Tarawa, and Iwo Jima. These, notably were used by the Navajo Code Talkers who were organic with the Marine Divisions in those amphibious operations. 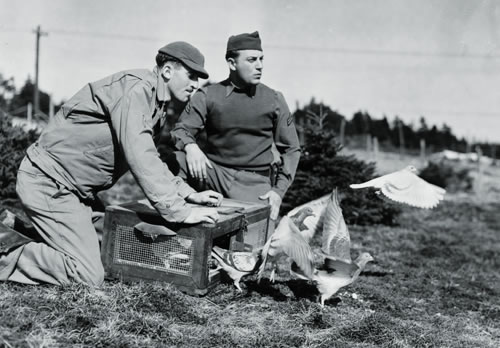 Pigeons were first used by armies for carrying messages over 2,000 years ago.  During WWI, pigeons were routinely used by both sides of the conflict for carrying messages. The US Army Signal Corps established a pigeon service in 1917. Pigeons were still used WWII for emergency communications and were used by the US Army, Navy, Coast Guard and Marines. Pigeons were carried in baskets, or carried in a sling and released with messages carried in a small container attached to the pigeon's back. During WWII, some pigeons traveled over 600 miles  and could fly at speeds up to 60 miles per hour.  At the front, pigeons were housed in 1/4 ton combat lofts. 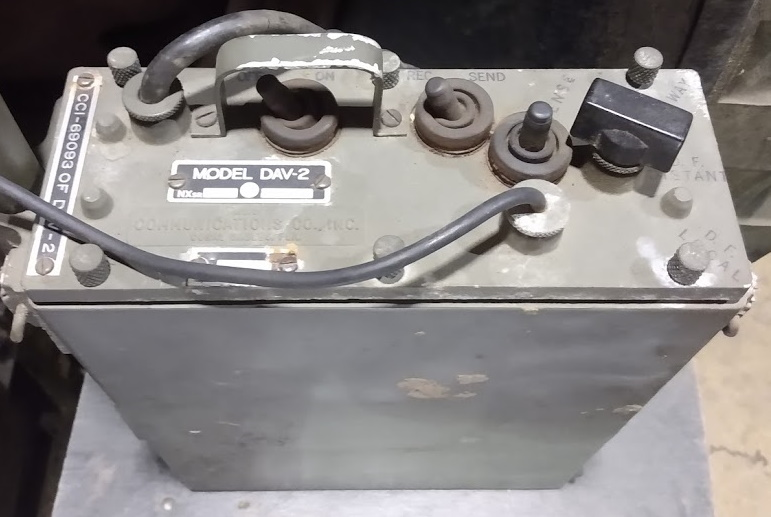 The DAV-2 Radio serves as a two-way radio telephone and as a radio direction finder for homing onto the location of a remote transmitter.  The DAV-2 is crystal controlled and operates on the frequency range of  2.3 to 4.5 megahertz. The DAV-2 operates in voice communications mode only. The transmitter generates .2 watts and has a range of about 1 mile. The antenna loop unit, power supply and transceiver all fit into a watertight plywood case intended to be carried on the operator’s chest using webbing straps. The transceiver utilizes seven vacuum tubes and is powered by a vibrator power supply requiring a lead-acid battery for primary input voltage. The complete radio consist of several sub-units including the transmitter-receiver, the power unit, the loop and switching unit, the antenna and load coil assembly, and the microphone, headset and cables. The switching unit is an electromechanical assembly used to transition the unit from two-way radio operation to direction finding operation. When using the radio in direction finding mode, the radio receiver will detect transmission from the target radio as a constant tone. The operator turns in a 360 degree circle. The direction at which the receive signal is weakest is either the true direction of the transmitter, or directly away from it. Then, depress and hold the sense button. The signal should increase in intensity. The operator then rotates his body to the right. If the signal reduces in intensity, the operator is facing in the true direction of the target system.   (World War II Radio Display) 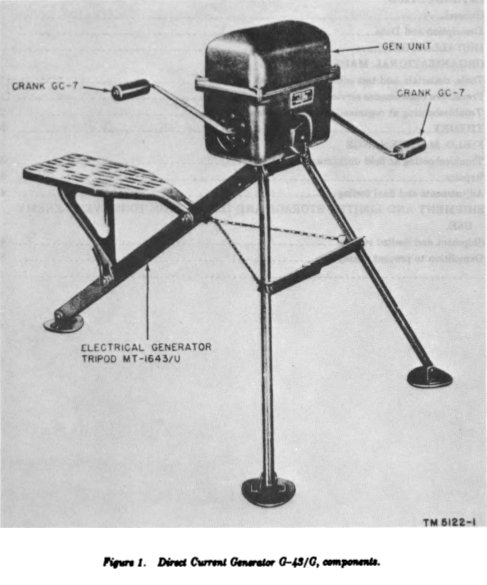 The G43 is a hand crank generator designed to power radio set GRC-9 and GRC 109 for use in the field.  The generator comes in a kit that is assembled on a tripod so the operator can sit and operate the hand cranks to run the generator.  The G43 produces 10.5, 17.5 and 30 volts DC at 52 watts. The G43 is functionally equivalent to the GN 58 generator. 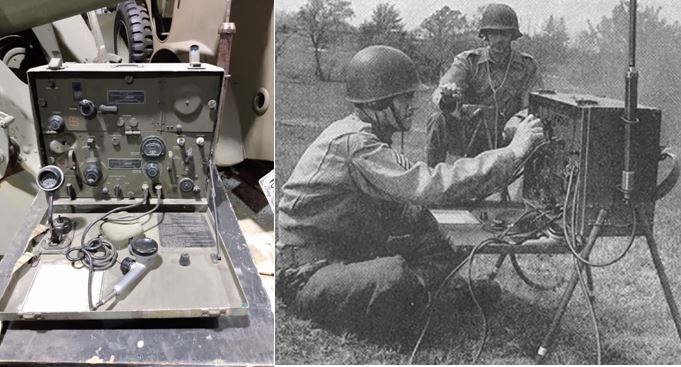 The BC 654 Radio set was first deployed in World War II. The radio was first used during Operation Torch of the Africa Campaign and provided communications for troops at the beachhead to direct fire from naval vessels off-shore. The radio was designed to be used in fixed installations and in vehicles but was sometimes carried by US troops notably in Guadalcanal which quite a task considering its 40+ pound weight. Troops that carried it described the experience as similar to carrying a room air-conditioner. The BC-654 is part of a radio set referred to as the SCR-284. More than 50,000 of these radio sets were produced for D-Day alone. 150,000 were produced during World War II. The complete SCR-284 system was quite heavy weighing about 100 pounds. The complete radio set includes an antenna, headphones, microphones, and the PE-103 Power Unit (Dynamotor). The BC-654 can also be powered by the GN-45 hand-crank generator.   (World War II  Radio Display ) 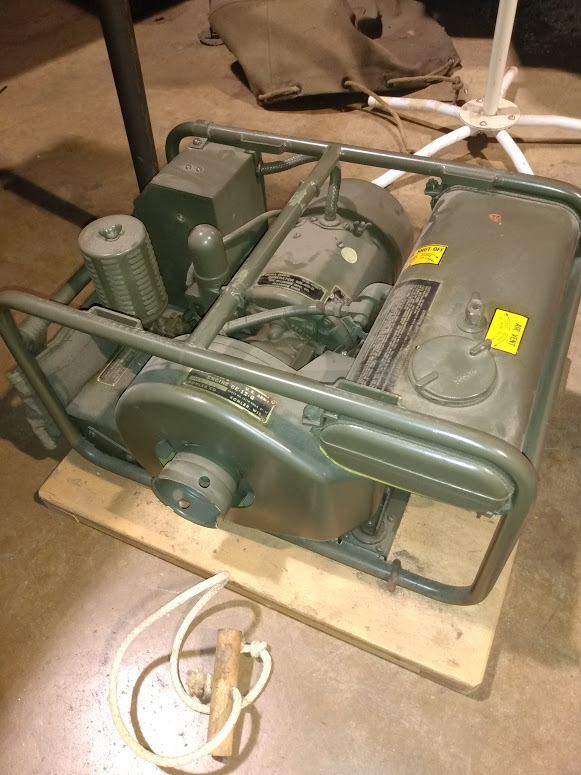 The PE-162-C is a compact, lightweight gas powered generator. The generator uses a single cylinder, air-cooled, two-cycle  gas powered 1 HP engine at 3,000 rpm to drive the GN-50-B DC Generator.  The complete power unit is attached with rubber mounts on an open frame tubular chassis. The Direct Current  GN-50-B generator is a 3-wire, shunt wound, self excited 7/550 volt 150 watt generator.  The GN-50 generator is directly coupled to the engine shaft by a splined coupling. This power unit is very similar to and interchangeable with the  PE-162-A and the PE-162-B and is used to power the BC-654 Radio. . 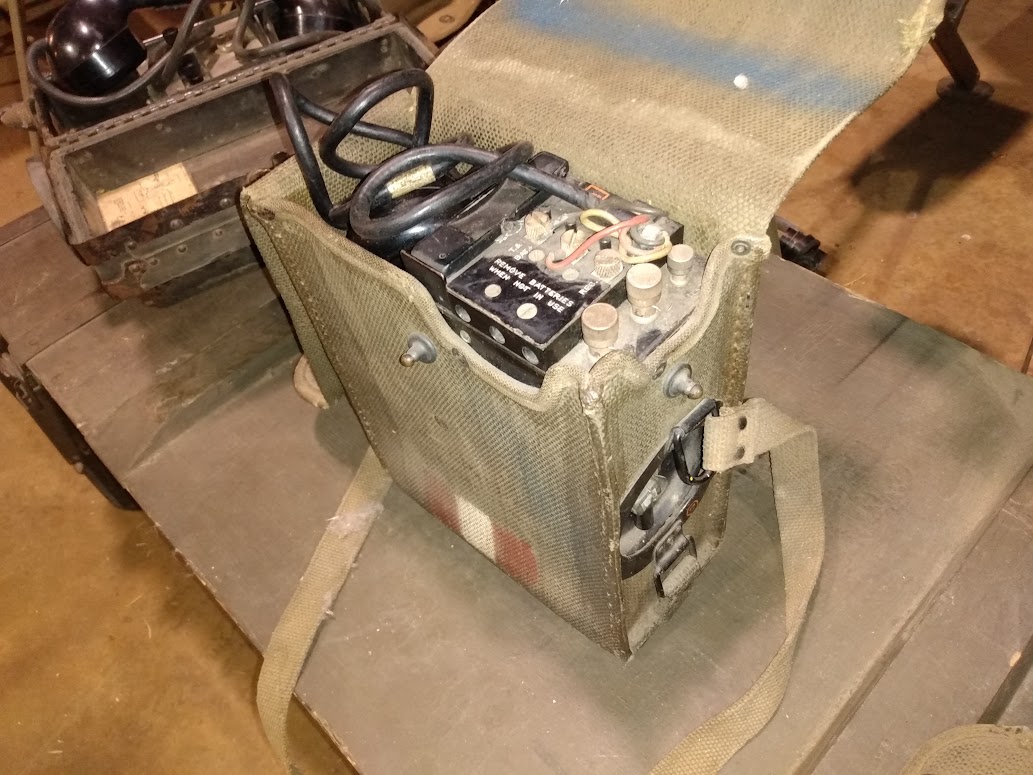 The EE8 Field Telephone was used by the US Army Signal Corps from the beginning of WWII through the Vietnam War. This phone set was first designed and developed in 1932.  The EE8 was the successor to the EE5 Field Phone and had a range of six miles greater than the EE5.  The EE8 can operate in either Local or Common Battery phone networks. The range of this phone varies with the type of wire used and the field conditions in which it is deployed. In general, a range of 11- 17 miles was typical when operating in Local Battery mode. This is suitable to service a Corps area. The EE8 phone is housed in a chassis enclosure of approximately 9" x 8" x 4".  With its internal battery, the phone weighs about 10 pounds. The primary difference between the EE-8 and the other Field Phone models is that a section of the case lid has been cut out and replaced by flexible material to enable the handset to be hung on the case in a position to hold down the hook switch. The EE8 was usually issued in an olive drab canvas case. The chassis was made of aluminum. A terminal block is mounted on the top of the phone containing binding posts for wire connection. The EE8 uses the GN38 hand crank 90-100 volt 20-hertz ringing generator. The hand crank is located on the side of the case. The phone uses two D cell batteries.  The two modes of use are point-to-point mode and as subscriber in a switched telephone network. 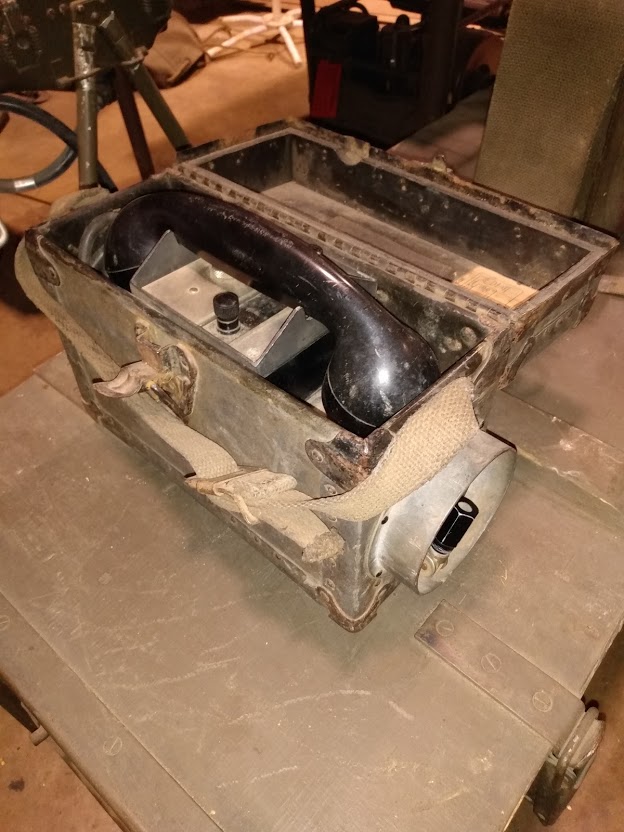 This is a model D-780504-C-8 Monophone made by Automatic Electric. These were made pre-WWII but were used through the 70's. A cover plate on the top of the phone can be removed to replace the roughly D sized battery cells. The phone mechanism includes a hand crank generator for ringing other phones in the network. These phones are very well made and rugged. 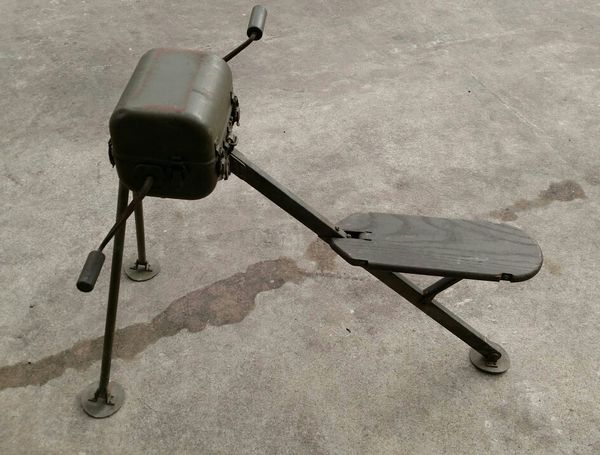 The GN58-A is a hand crank generator manufactured by Tele King Corporation for the US Army Signal Corps.  The GN 58 produces outputs of 1.4v @465 ma, 6.3v @2.5 amps, 105v @32 ma, and 425v @115 ma volts DC. The GN58-A is operated by turning a pair of GC-7 cranks inserted into the drive sprockets on each side of the generator housing.  The generator is typically mounted on a tripod with a seat for the operator. This generator was used to power the AN/GRC-9  and the BC 1306 radio.  The GN58 was produced near the end of WW2. 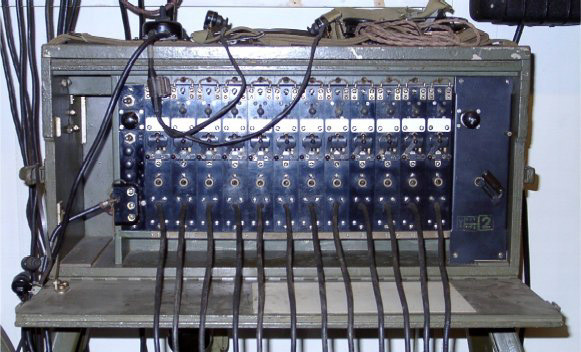 The BD-72 Switch Board is a portable monocord magneto telephone switchboard used for connecting field wire telephones. The BD-72 was used during 1941 through 1952.  It was replaced by the SB 22 Switchboard. The BD-72 has a capacity of 12 lines.  The BD-72 contains all the necessary components for terminating and switching field telephone circuits. 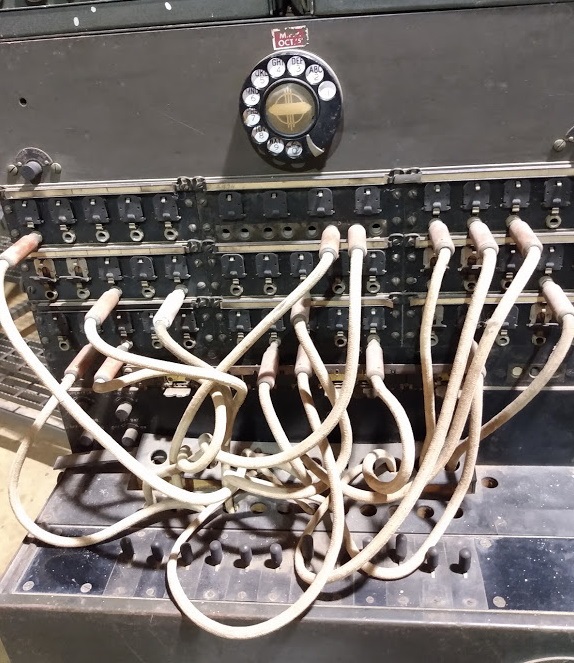 (12) The Telephone Switch Board BD-96 is portable single position field telephone switchboard used for serving magneto line telephones, terminating trunk lines, and ring-down circuits. Trunk circuits are provided which may connect common battery lines for manual or automatic central office equipment. Line jacks are wired to a binding post panel on the top of the switchboard. 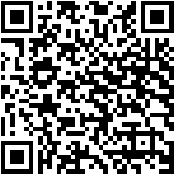