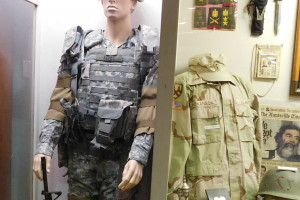 The U.S. Veterans Memorial Museum has a large collection of uniforms spanning the history of the United States of America.  Uniforms back to the Vietnam War ans War on terror.  Where care was taken to recreate or repair uniforms to uniforms of present day can be found on display. 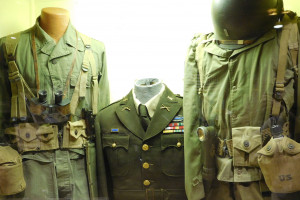 The U.S. Veterans Memorial Museum has a large collection of uniforms spanning the history of the United States of America.  Uniforms  back to the Revolutionary War, where care was taken to recreate or repair uniforms to uniforms of present day can be found on display. 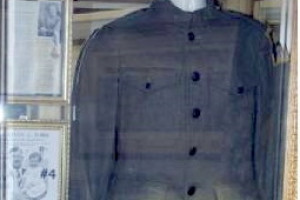 On Veteran's day 2019 the U.S. Veteran's' Memorial Museum unveiled a new addition to their WW I exhibit. Alvin C. York, a Tennessee sharpshooter, who was the most decorated hero of WW I was a strong supporter of public education. A local Huntsville resident has donated a collection of memorabilia from York's wedding and from the York Institute School. 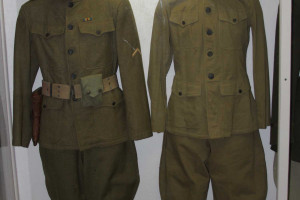 The "Dough Boy" wool "1918" uniform with cartridge belt and pistol holster with a .45 calibers pistol and cartridge pouch. The uniform has "leggings" (Cotton leg Wraps) to protect soldiers from snakes crawling up the trousers. Rank on uniform Private First Class (PFC), World War I Victory Medal Ribbon. Brown ankle high boots. The uniforms of World War I are largely recognizable. 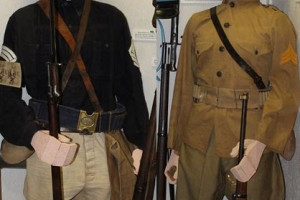 The Spanish-American War featured major changes. Uniforms at this point were replaced by khaki field uniforms that were inspired by the British pattern. The material of the uniforms at this time shifted from wool to cotton, and special campaign hats were issued 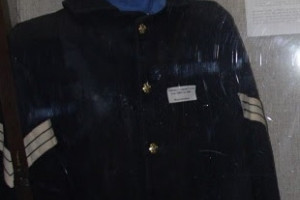 Most soldiers were dressed in blue woolen uniforms, with brass buttons. Because of the vast areas to be covered, most troops were mounted. Later in the movement west, woolen shirts were replaced by "blue" dyed cotton shirts and wooden or bone buttons. As the westward expansion continued, the uniform was replaced by the khaki uniform in the late 1890s. 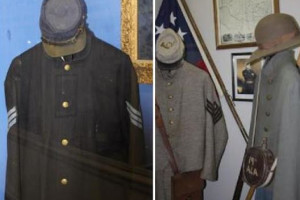 Many Northern states at the start of the Civil War issued uniforms similar to Mexican American War uniforms. So the military officials of these Northern states, many of whom had military service during Mexican American War, must have believed this style uniforms were not outdated. Confederate uniforms were a bit out dated when compared to the "newer" style US Army uniforms. It wasn’t until after the war began that both sides started to standardize their uniforms due to the confusion of these different colored uniforms. 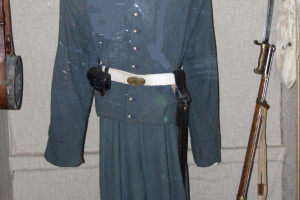 Following the War of 1812, the US Army again updated and standardized its uniforms. The new ones were noted for their blue wool coats that featured high-necked collars and front-facing buttons. In some cases, when blue wool could not be found, gray wool was used. These coats were also matched with "tombstone" shako caps. 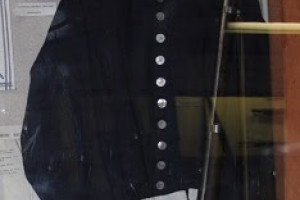 The War of 1812 is an unusual period, or rather two periods, in terms of the attire for military personnel. The first period 1812 through the first half of 1813 the American military uniform is basically the British military uniform except in blue where it would be red. Although even that is not absolute; musicians wore red uniforms that looked almost exactly like British uniforms. 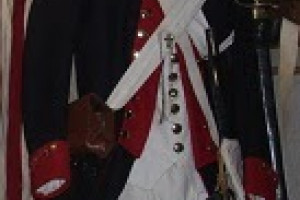 A replica of the America army soldier's uniform, as displayed is made with three colors red, blue and white, with brass buttons, made of hand woven cotton.   The colors worn on uniforms had more meaning than mere fashion that caught civilian acceptance. 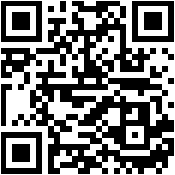