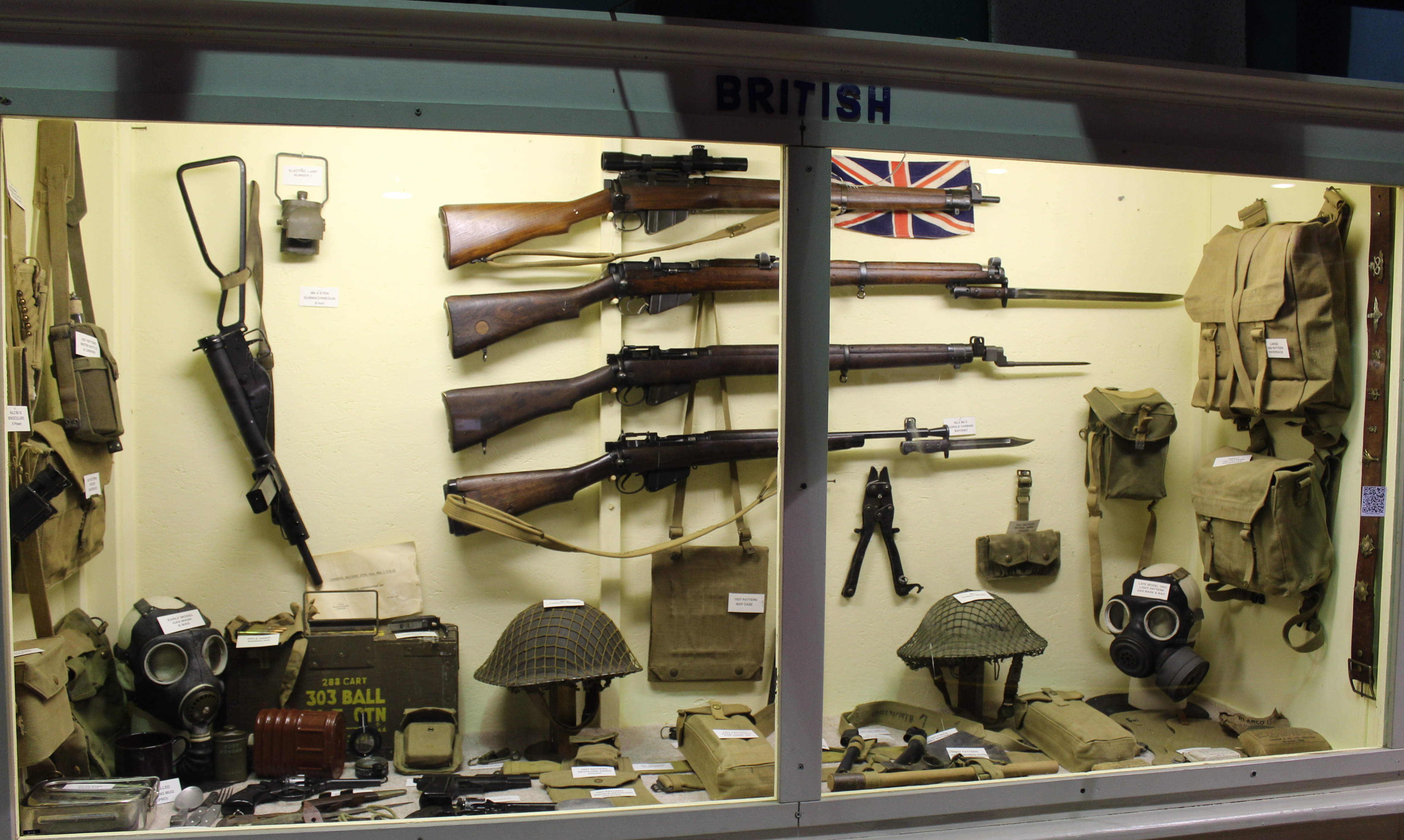 The Bren is a series of light machine guns manufactured by the British in the 1930s. The Bren was the primary light machine gun for British and Commonwealth forces during World War Two. The Bren has had a long service life and saw action in the Korean War and the 1982 Falklands War. The Bren gun was a licensed version of the Czechoslovak ZGB 33 light machine gun. The most distinctive features of the Bren are the top mounted curved 30 round magazine and the conical flash hider. The Bren also had a quick change barrel. In the 1950s, many Bren guns were re-barreled to accept the 7.62×51mm NATO cartridge and modified to feed from the magazine for the L1 FN FAL rifle as the L4 light machine gun. The Bren was later replaced by the L7 belt-fed general purpose machine gun. The magazine was curved in order to feed the rimmed .303 SAA "Small Arms Ammunition" cartridge. The Bren was a gas-operated weapon, which used the same .303 ammunition as the standard British bolt-action rifle, the Lee–Enfield. The Bren fired at a rate of between 480 and 540 rounds per minute. The Bren was designed to allow quick change of the barrel and the weapons were usually supplied with a spare. Later manufactured weapons were equipped with a chrome lined barrel. The magazine fed design of the weapon reduced its rate of fire and required more frequent reloading than similar belt fed weapons.  The sights were offset to the left, to avoid the magazine on the top of the weapon. The position of the sights meant that the Bren could be fired only from the right shoulder. The Bren was operated by a two man crew, the gunner and loader. The Bren was generally fired from a prone position using the bipod but could be fired while standing using the sling for support.  The Bren had an effective range of about 600 yards. One disadvantage of the design was the top mounted magazine. These made the weapon more visible in combat. The Bren was considered to be a reliable and effective weapon and was popular with British troops.  It was considered by some to be the finest light machine gun of its time. The Mark II Bren was an improved design of the Mark I intended to reduce cost of manufacture and weight for jungle warfare. The Mark II was standardized in 1944.  The "Inglis" model displayed in the museum was manufactured in Toronto, Canada.  186,000 were manufactured at the John Inglis facility. The Bren was also used on many vehicles, including on Universal Carriers  which it gave the alternative name "Bren Gun Carrier", and on tanks and armored cars. When the British Army adopted the 7.62 mm NATO cartridge, the Bren was re-designed to 7.62 mm caliber, fitted with a new bolt, barrel and magazine. It was redesignated as the L4 Light Machine gun and remained in British Army service into the 1990s. The Bren was light, durable and had a reputation for accuracy. 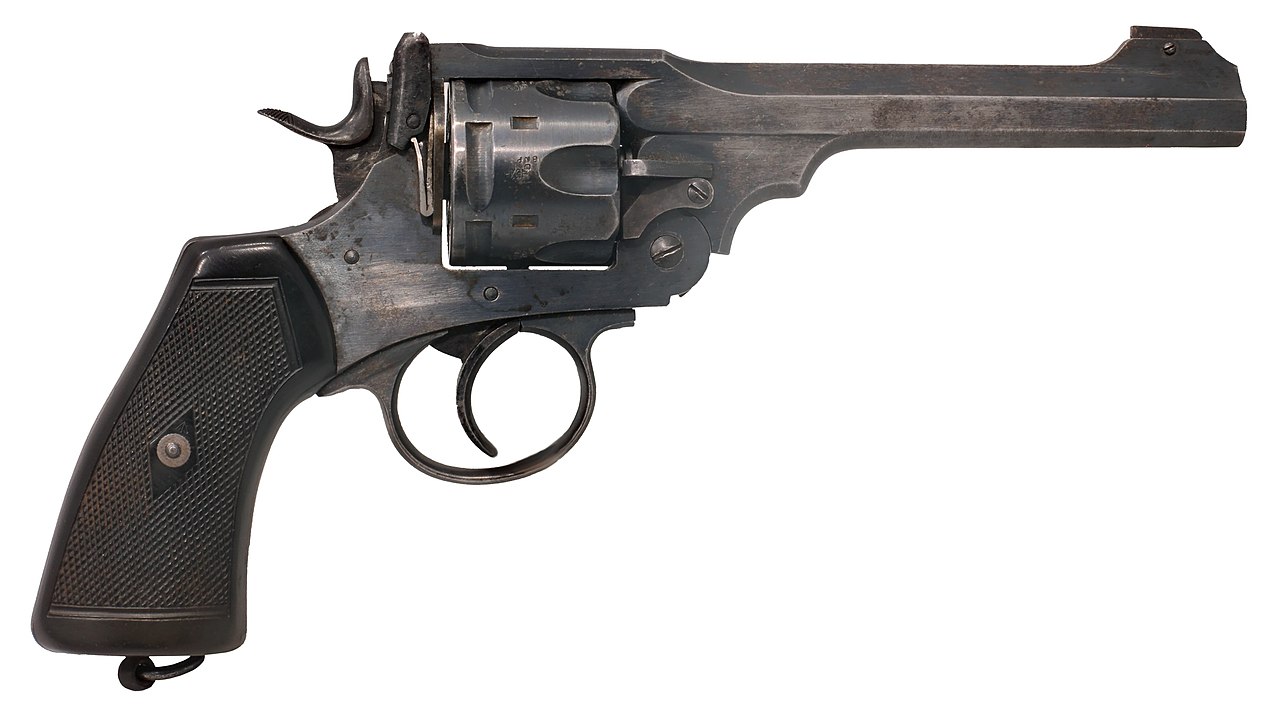 The Webley revolver was a standard issue service pistol for the  United Kingdom, and the British Empire and Commonwealth, from 1887 until 1963. The Webley's most distinctive feature is it's top-break revolver design which exposes the cylinder for loading cartridges and unloading spent casings. The MK IV is known as the "Boer" model because of it's prominence during the Boer War of 1899–1902. The Webley was originally designed to fire the .455 cartridge which made it the most powerful top break revolver ever made. The Webley was intended as a replacement for the largely unsatisfactory .476 Enfield Mk I & Mk II Revolvers. Larger numbers of these revolvers were used by British commissioned and non-commissioned officers during WW1. These revolvers were issued to officers, pipers and range takers, and later to airmen, naval crews, boarding parties, trench raiders, machine-gun teams, and tank crews.  Due to a shortage of handguns, the Webley was also issued as a service pistol during WW2. The Webley Mk IV .38 revolver was completely replaced by the Browning Hi-Power in 1963. The MK IV "Boer War" model was  manufactured using high quality steel and case hardened parts and a 4 inch barrel. The MK IV fired a .38 caliber cartridge unlike previous models designed for the .455 which was deemed too large for modern military use. 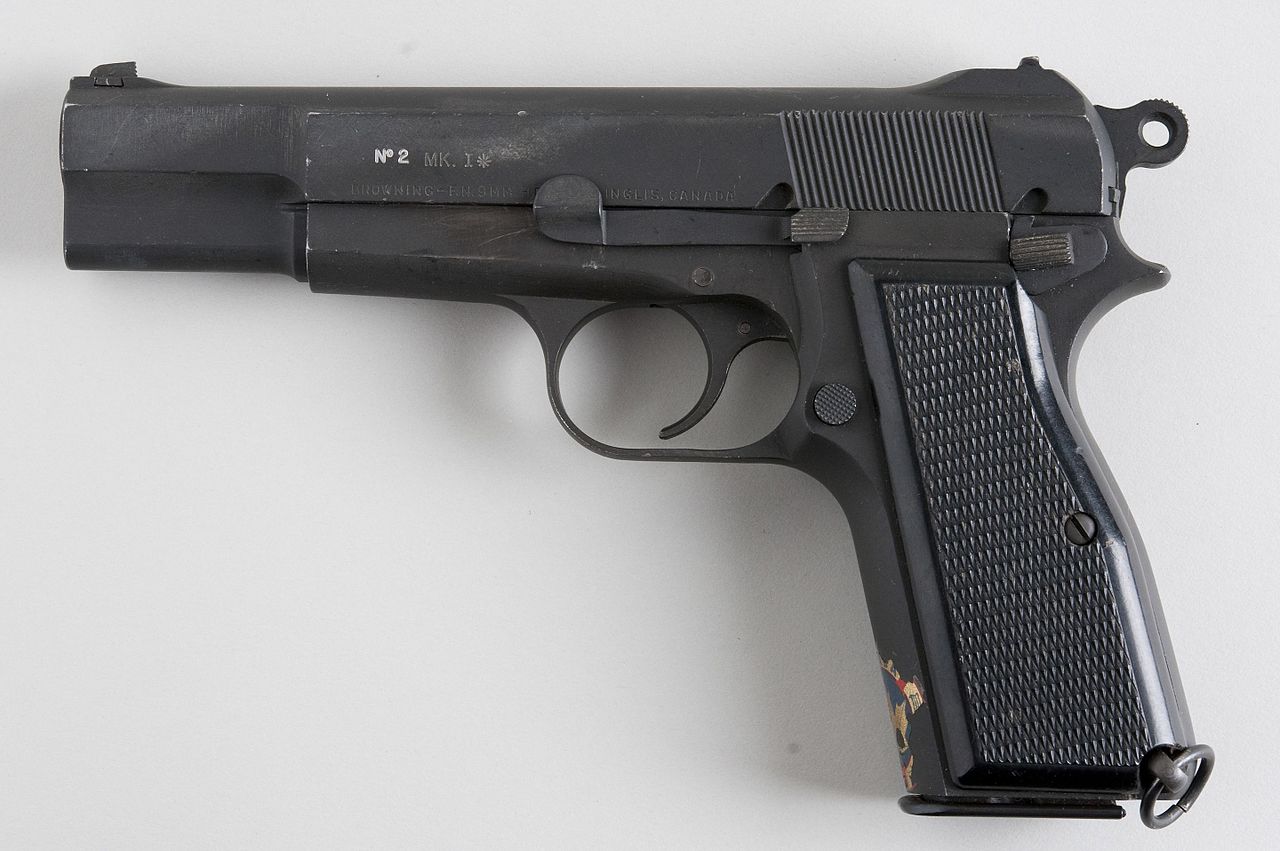 The Inglis is a single action semi-automatic pistol based on John Browning's High Power pistol and manufactured by John Inglis and Company in Toronto, Canada. It is chambered for the 9mm caliber cartridge. The name High Power alludes to the pistol's capacity of 13 rounds, almost twice the capacity of the standard 1911 semi-automatic pistol. The Browning High Power is one of the most widely used military pistols in history with over 50 million produced. The High Power pistol was originally manufactured in Belgium by Fabrique Nationale prior to the German occupation in World War II. Production of the firearm then moved to a John Inglis and Company plant in Canada. Hence the designation "Inglis".  Browning Hi-Power pistols were used during World War II by both Allied and Axis forces, the later having acquired FN manufacturing assets in Belguim during the occupation. The Inglis factory in Canada was tooled up to compensate for the loss of manufacturing in Belgium. Two versions of the Inglis pistol were produced, one with adjustable rear sights and mechanical accommodations for a detachable stock, the other with fixed rear sights. 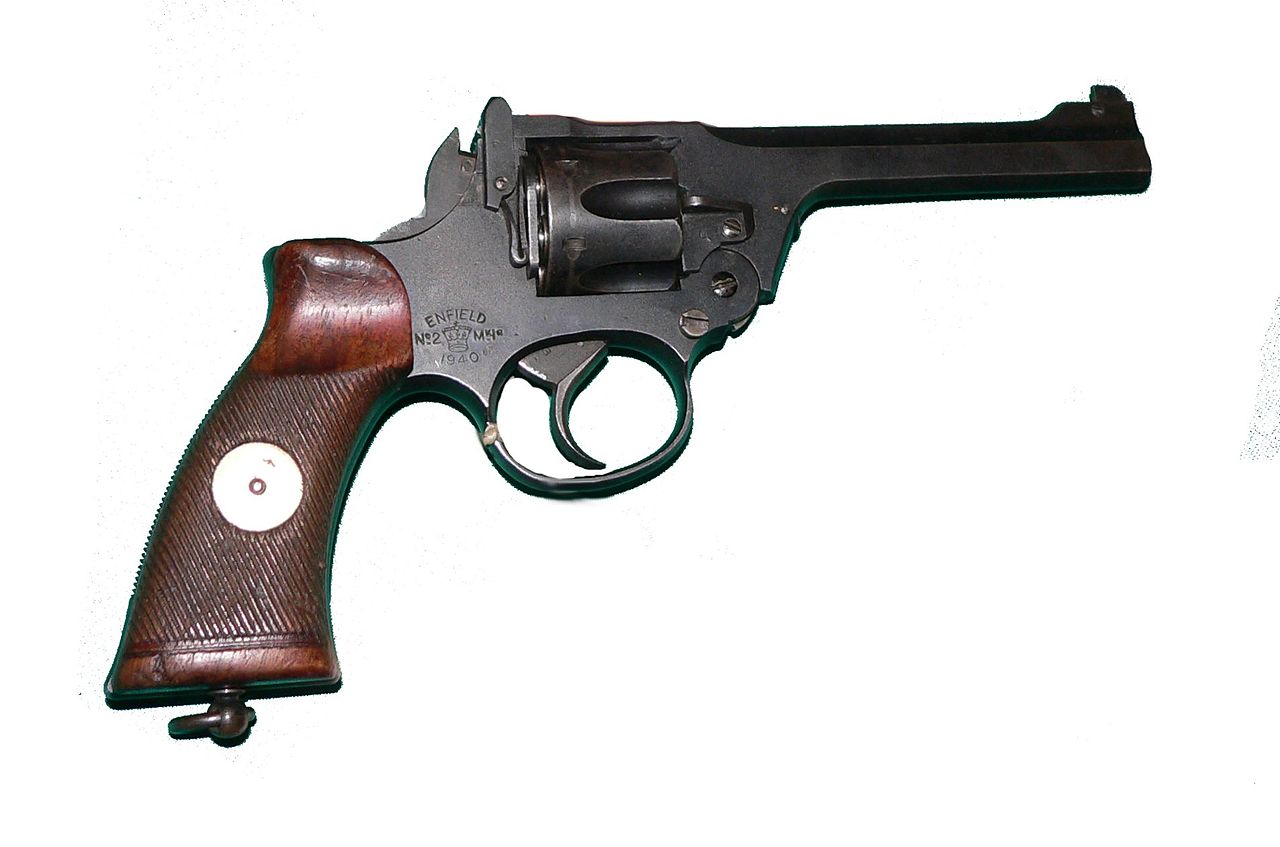 The No 2 Enfield Revolver is a British top-break revolver chambered for the .38/200. They were produced from 1932 to 1957. It was the standard service pistol for British armed forces along with the Webley. The .455 was originally the standard cartridge for service pistols but the heavy recoil limited the effectiveness. The .38 was determined to have adequate stopping power and was easier to fire accurately, so the .38 was adopted over the .455. The design of the Enfield revolver was similar enough to the existing Webley design that, when the British adopted the Enfield over the Webley, Webley sued. Enfield was ultimately unable to produce large enough quantities, so Webley revolvers were eventually issued to the military instead of the Enfield.

The STEN was a series of British submachine guns chambered in 9×19mm and used extensively by British and Commonwealth forces throughout World War II and the Korean War. The STEN had a simple design and low production costs. The name of the weapon is derived from the weapon's chief designers, Major Reginald V. Shepherd and Harold Turpin, and EN for Enfield. Over 4 million STENs and STEN variants were produced in the 1940s. The STEN emerged during the Battle for Britian at a time when the British war effort had a high demand for submachine guns which could not be satisfied with Thompsons from America.  The most distinctive feature of the STEN is its side mounted 32 round magazine. The Sten used simple stamped metal components and minor welding resulting in low production costs. The STEN III reportedly required 5 hours to manufacture. Cheap versions were manufactured with 47 parts.  The Sten was a blowback-operated submachine gun firing from an open bolt with a fixed firing pin on the face of the bolt. Its basic operation is similar to the German MP40 and the Soviet PPSH. A submachine gun like the STEN put firepower in the hands of infantry that were otherwise equipped with bolt action rifles. As is the case with many similar weapons of this class, the short barrel and pistol round it fired resulted in a short effective range of about 100 yards. The STEN was known to have some reliability issues as a result of its magazine design, such as failure to feed and deformation of the magazine lips. The open bolt design also led to some cases of accidental discharge when the weapon was dropped. The Mark II was the most common variant with two million produced.

The Lee Enfield No 4 Mark 1 was the standard sniper rifle used by British and Canadian forces during World War II. The design was based on the SMLE rifle. These rifles saw extensive use during the war and was highly regarded. The No 4 Mark 1 sniper rifles were hand picked from standard No 4 Mark 1 rifles and selected for their accuracy. Wooden cheek rising pieces and telescopic sight mounts were added to accommodate number 32 3.5x scopes. These scopes had a field of view of 8 degrees 20 minutes. The scopes featured a bullet drop compensation range drum on top of the sight graduated in 50 yard increments for a maximum range of 1,000 meters. Creating the sniper rifles was done by a famous British sporting arms manufacturer Holland and Holland. About 23,000 rifles were converted. Some of these  rifles were later converted to use the standard NATO 7.62 x 51 mm rifle cartridge. These were designated the L42A1. The L42A1 was eventually phased out in 1993.

The Lee Enfield rifle is the second longest serving bolt action rifle surpassed only by the Soviet Union's Mosin Nagant rifle. The Lee-Enfiled was the main firearm for British and Commonwealth armed forces throughout the first half of the 20th century. These were officially replaced by the L1A1 SLR in 1957 although the sniper version remained in service well into the 90's. It is still used by many countries in the world. It is highly favored by the Mujahideen in Afghanistan who value its effective range more than rate of fire. The Lee–Enfield takes its name from the designer of the rifle's bolt system, James Paris Lee, and the factory in which it was designed, the Royal Small Arms Factory in Enfield.  The rifle is equipped with a 10 round magazine which can be manually loaded from the top or by use of 5 round chargers. The total number produced is estimated to be about 17 million.  The design of the bolt mechanism facilitates rapid aimed fire (up to 20 rounds per minute) so that the rifle can be cycled by most riflemen without loss of sight picture. The NK III was introduced on 26 January 1907 with the chamber adapted to fire the new Mk VII High Velocity Spitzer .303 ammunition. The SMLE Mk III* saw extensive service throughout the Second World War as well, especially in the North African, Italian, Pacific and Burmese theaters in the hands of British and Commonwealth forces. 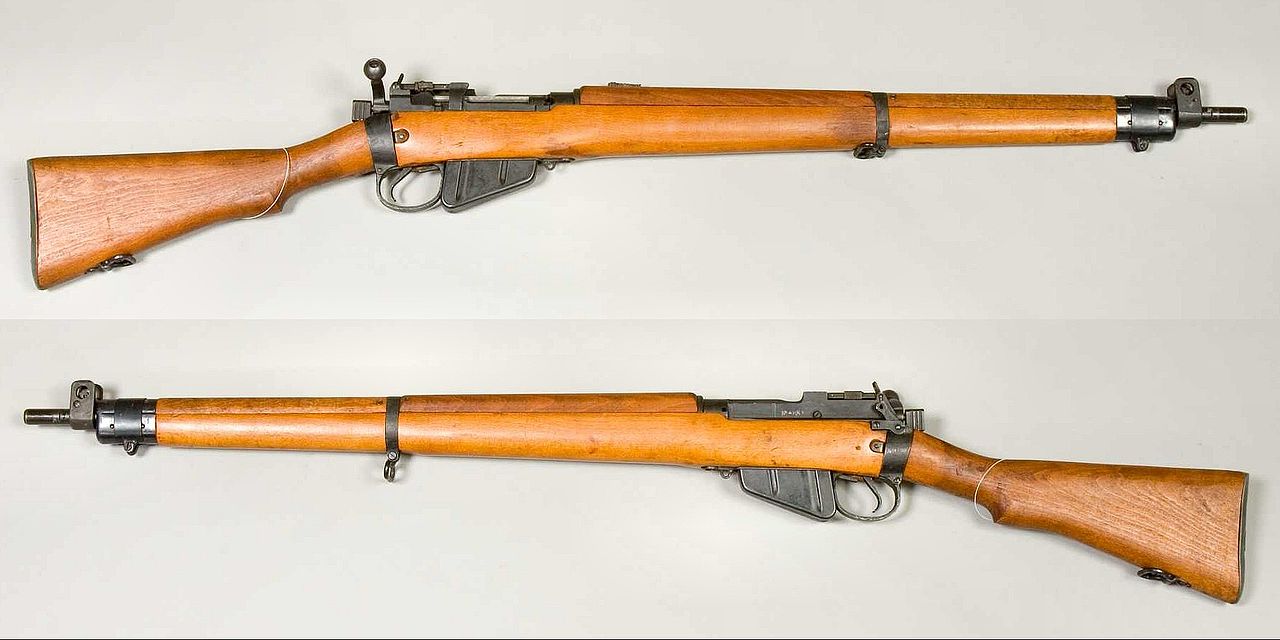 The No 4 MK I was a variant of the Lee Enfield design adopted in 1941. It was similar to the MK VI but had a stronger action and design changes intended to facilitate manufacturing. Unlike other Lee Enfields, the MK barrel extended slightly beyond the stock. The iron sight line was redesigned and featured a rear receiver aperture battle sight calibrated for 300 yards with an additional ladder aperture sight that could be flipped up and was calibrated for 200–1,300 yards  in 100 yard increments. This sight, like other aperture sights, proved to be faster and more accurate than the typical mid-barrel open rear sight elements sight lines offered by Mauser, and previous Lee–Enfields. The No 4 was heavier than previous designs because of its heavy barrel. The No.4 rifle was primarily produced for the United Kingdom, Canada and New Zealand.

This rifle was donated by  W.C. Casey

The Jungle Carbine is a variant of the Lee-Enfield with design changes intended to render the rifle suitable for use in more confined environments which did not lend themselves well to full size battle rifles. Some of these design modifications included a cut-down stock, a prominent flash hider, and a "lightening-cut" receiver machined to remove all unnecessary metal, and a shortened barrel. The Jungle Carbine was two pounds lighter than the standard Lee Enfield.  The design was never considered successful and was known to produce excessive recoil due to its shortened barrel. Production ceased in 1947. 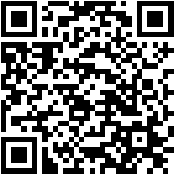