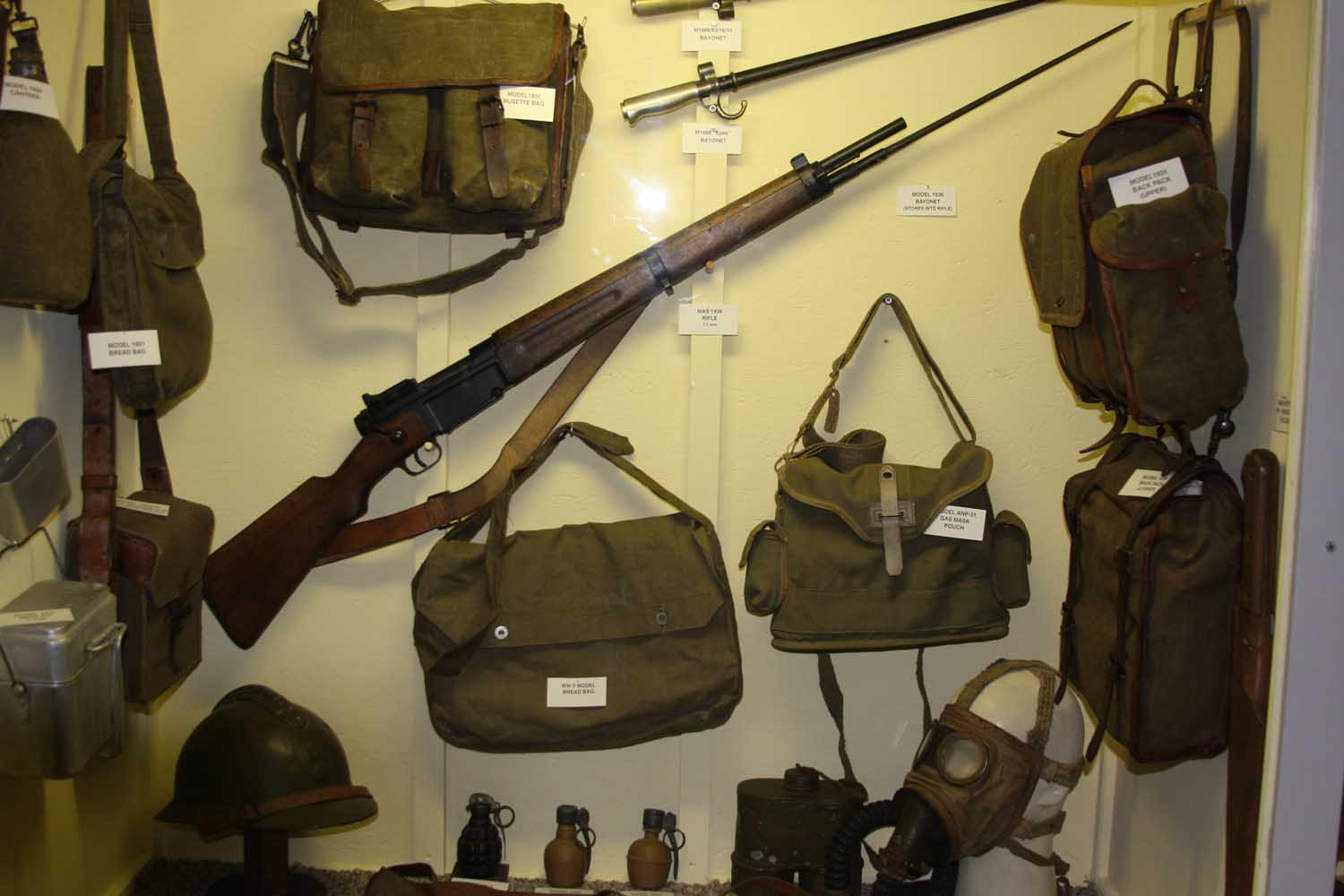 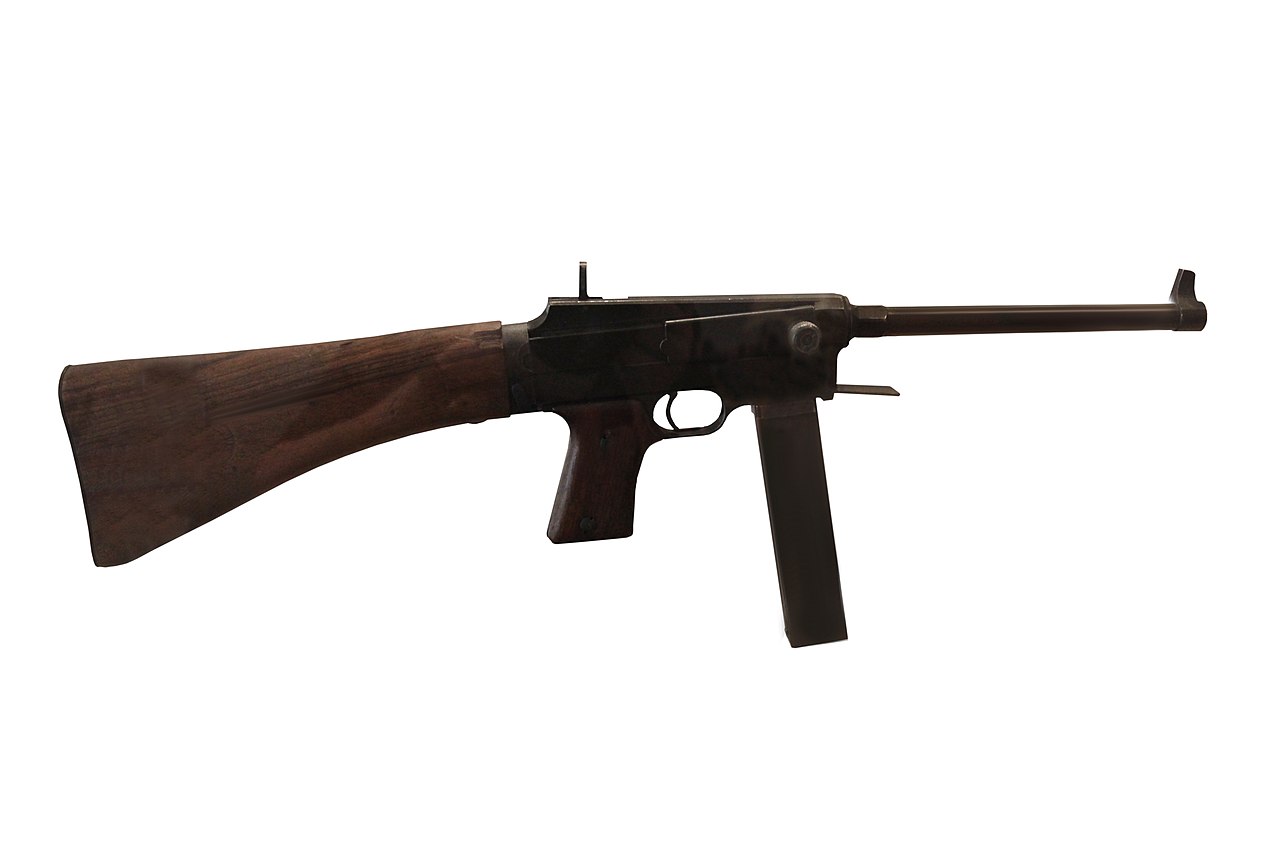 The MAS submachine gun is a firearm produced  by MAS, the Manufacture d'Armes de Saint-Étienne for the French Military in 1939. Few were made before German forces overran production facilities.  The MAS 38 is extremely compact, just over 24 inches long and weighs 6.5 pounds.  The MAS 38 fires the rather weak 7.65×20 cartridge which limited its effectiveness on the battlefield, and was less powerful than most other common SMGs of the period.  The MAS 38 has an unusual receiver design.  The MAS-38 utilizes a simple blowback action, firing full-auto only from an open bolt, however, the bolt and the barrel are not parallel. The bolt travels downwards as it goes back, relative to the barrel.  The breechface is cut at a matching angle to fit fully against the chamber mouth. This angle is partly to slow down the bolt and the rate of fire and partly to reduce felt recoil by using vertical travel of the bolt to compensate for it. There is no selector switch, so the MAS 38 fires full-auto only with a cyclic rate of about 600 rounds per minute. The sights on the MAS-38 are a triangular front post and a pair of independent flip-up apertures for the rear sight which can be set for 100m and 200m. The double feed box magazines have a 32 round capacity. Unlike other submachine guns made using stamped metal parts, the MAS 38 was a high quality weapon not designed for ease of manufacture.  Less than 2000 were manufactured.  A MAS 38 was used to execute dictator Benito Mussolini.

The MAS 36 rifle is a bolt action rifle adopted by the French in 1936.  It was manufactured from late 1937 onward by Manufacture d'Armes de Saint-Étienne. About 1.1 million were produced, but only 250,000 were available for the French Military during WW2.  The MAS 36 is a carbine style rifle, short and compact with a two-piece stock. The front sight is integrated into the foregrip which is not intended to be removed when field stripping.  It is chambered for the modern rimless 7.5×54mm French cartridge.  The rifle features two rear locking lugs on the bolt similar to the British SMLE which improved performance in muddy conditions. The MAS-36 bolt handle is ergonomically bent forward to bring it into a convenient position for the soldier's hand. The MAS 36 has a short 22 inch barrel and interestingly, no safety. The rifle is equipped with a bayonet stored in a round tube under the barrel.  The iron sights were calibrated from 100m to 1200m. The MAS has an internal 5 round non-removable magazine.  The rifle has a reputation  for reliability and ruggedness and saw action in various conflicts around the world well beyond WW2. 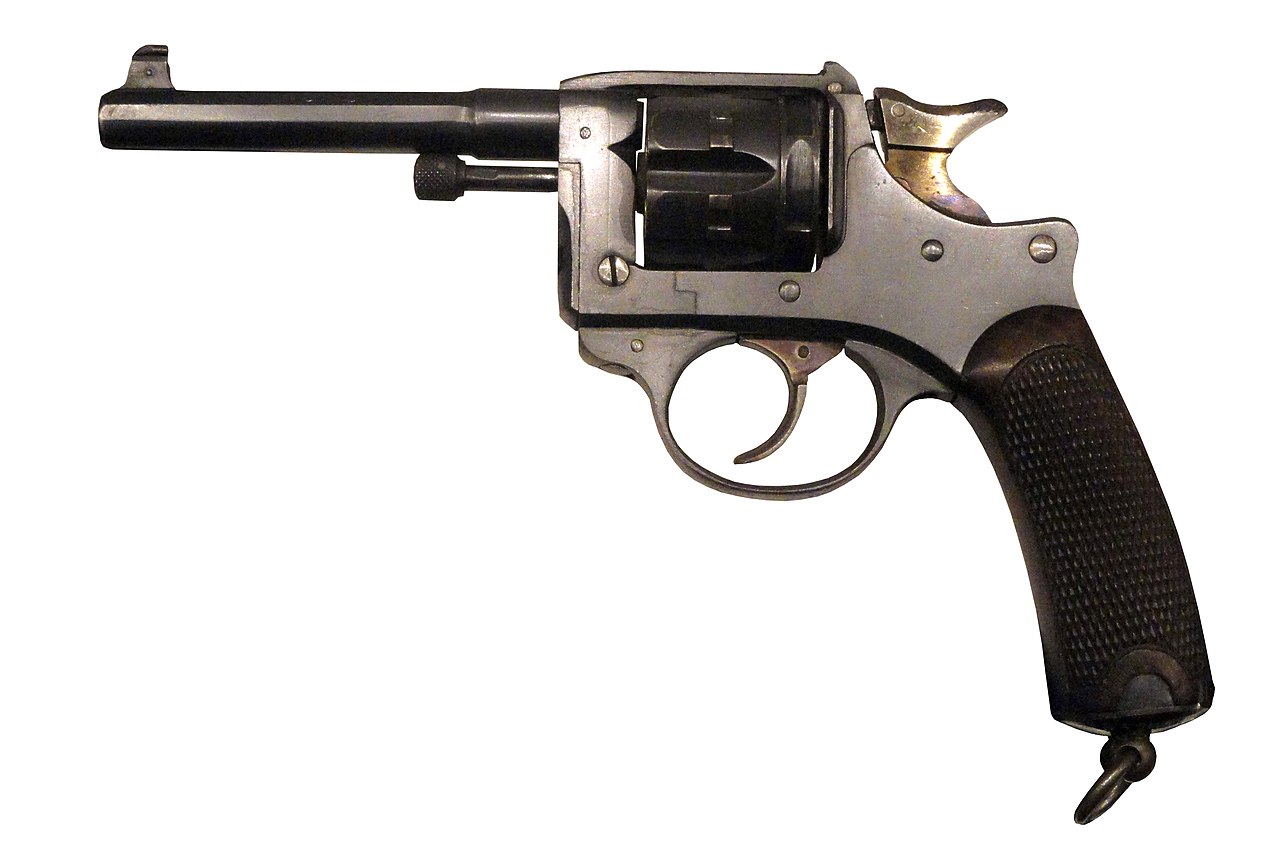 The Model 1892 double action revolver is a French service revolver produced by Manufacture d'armes de Saint-Étienne. It was designed to replace the MAS 1873 revolver. It was the standard issue sidearm for officers in the French Military Forces during World War One. The Model 1892 revolver is a solid frame revolver with the cylinder on a separate frame swinging right for reloading. The Model 1892 was first fielded in 1893 and was prominent among French military officers during First World War, and French police until the mid-1960s.  It fires 8mm rounds, smaller than most other military revolvers of the time with power similar to a .32 caliber pistol round.  About 350,000 Model 1892 revolvers were manufactured between 1892 and 1924. The Model 1892 is mechanically very well made and finished, and very accurate. 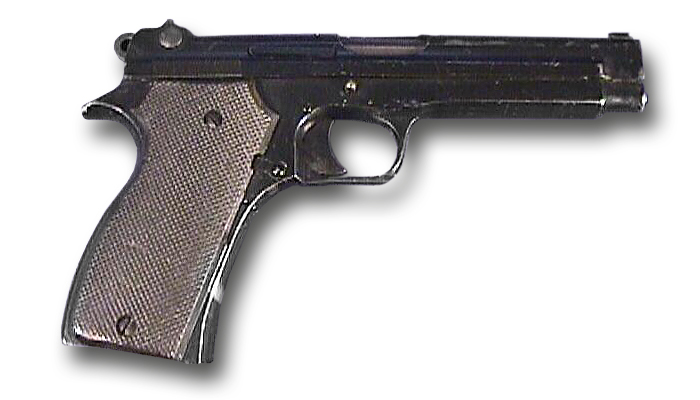 The Pistolet Automatique Modèle 1935A, also known as the French Model 1935A, or M1935A is a semi-automatic pistol designed by Charles Petter, chambered for the 7.65mm Longue cartridge.  The design had some similarities to the 1911 Browning such as the grooved slide and barrel which interlocked and recoiled together until a pivoting link lowered the barrel. Initial production began in 1937 and was issued to French troops starting in 1939.  Roughly 10,000 were produced before manufacturing facilities were captured by German forces. Total production is estimated to have been roughly 85,000.  The pistol is very well balanced and accurate, but fires an underpowered round, less powerful than the 9mm. Production was officially halted in 1950. 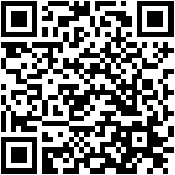