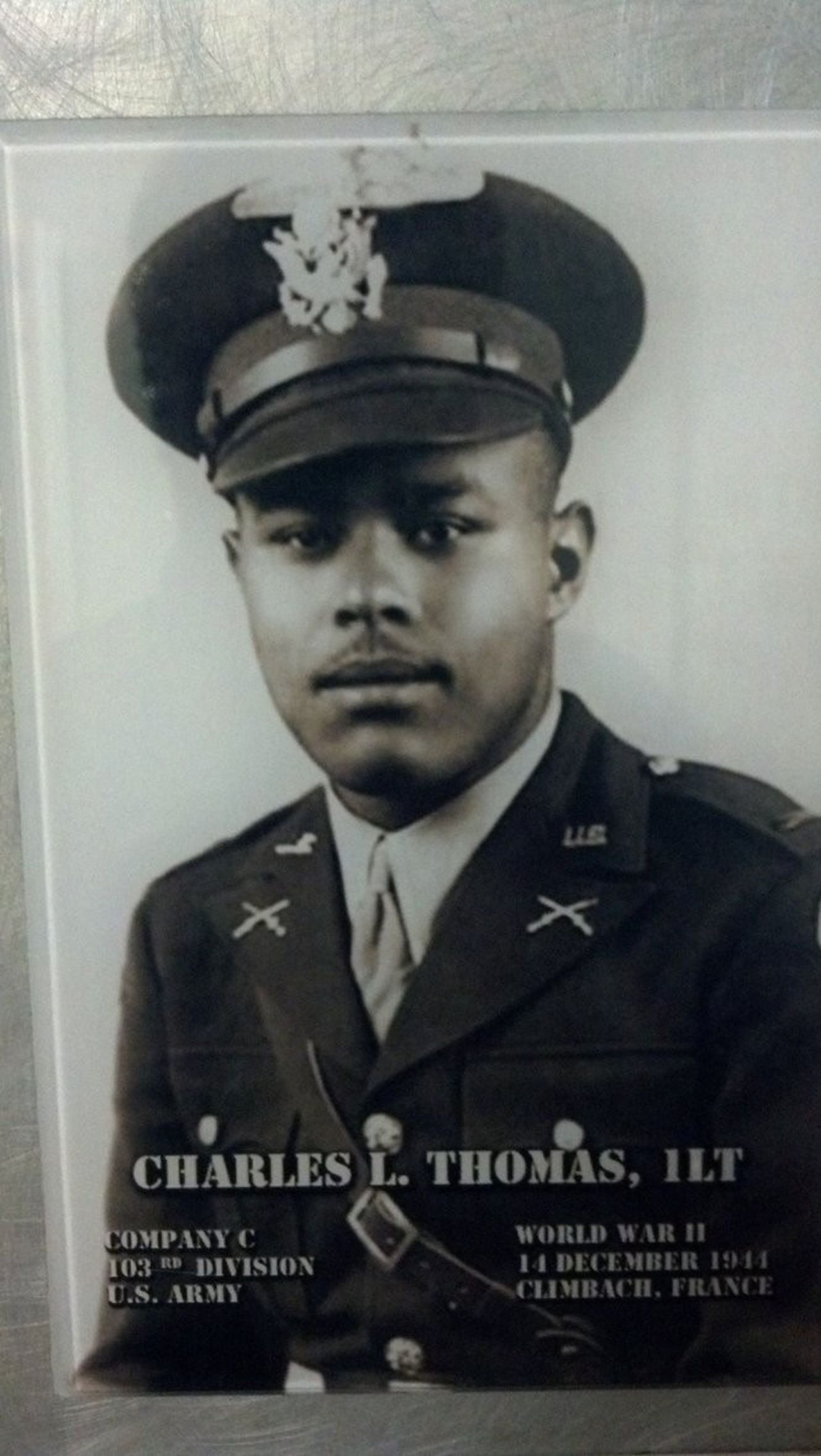 During World War II, more than a million Black men served in the U.S. military; however, not one of them received the Medal of Honor during the war or directly afterward. Decades later, when a review called that discrepancy into question, Army Maj. Charles L. Thomas posthumously became one of the first Black men from that era to receive the nation's highest medal for valor.

Major Charles Thomas was born in Birmingham Alabama April 17th 1920.  He graduated from high school in 1938 and went to work with his father as a molder at a Ford Motor Company plant. He'd also enrolled in Wayne State University to study mechanical engineering, but then the war began, and he was drafted into the Army on Jan. 20, 1942.
Thomas started his military career in the infantry, but he was quickly chosen to attend officer training school. He was commissioned as a second lieutenant on March 11, 1943, then assigned to Company C of the 614th Tank Destroyer Battalion.

His unit arrived in England in September 1944 and eventually joined Gen. George Patton's 3rd Army in France, first seeing combat toward the end of November 1944. The battalion was attached to the 103rd Infantry Division when a 24-year-old Thomas performed the heroics that would put him in the history books.

Thomas stayed in the Army for about two more years before leaving in August 1947 to return to civilian life. He married and had two children. His family returned to Michigan, where Thomas worked as a missile technician at Selfridge Air Force Base (now Selfridge Air National Guard Base) before joining the IRS as a computer programmer. Thomas died of cancer on Feb. 15, 1980, in Wayne, Michigan. He is buried there in Westlawn Cemetery.

For conspicuous gallantry and intrepidity at the risk of his life above and beyond the call of duty: Then Lieutenant Charles L. Thomas distinguished himself by extraordinary heroism in action on 14 December 1944. One platoon of Company C, 614th Tank Destroyer Battalion, was designated as the lead element in a task force formed to storm and capture the village of Climbach, France. Lieutenant Thomas, the Commanding Officer of Company C, realized, with the obscurity of information regarding the enemy and a complete lack of reconnaissance, the mission would be an extremely dangerous one. Fully cognizant of the danger, Lieutenant Thomas volunteered to command the selected platoon of his company and ride in the column's leading vehicle - a highly maneuverable, but equally vulnerable, M-20 scout car. Lieutenant Thomas knew that if there was a concentration of enemy armor in the village, as was believed, he would absorb the initial shock of the first enemy resistance. The task force left Preuschdorf, France, at 1023 hours, and proceeded to advance in column toward Chimbach. Lieutenant Thomas in his scout car stayed well in front of the column. At 1400 hours, upon reaching the high ground southeast of the village, Lieutenant Thomas experienced initial contact with the enemy. As his scout car advanced to an exposed position on the heights, he received intense direct fire from an enemy artillery, self-propelled guns, and small arms at a range of seven hundred yards. The first burst of hostile fire disabled the scout car and severely wounded Lieutenant Thomas. He immediately signaled the column to halt. Before leaving the wrecked vehicle, Lieutenant Thomas and the crew found themselves subjected to a veritable hail of enemy fire. Lieutenant Thomas received multiple gunshot wounds in his chest, legs, and left arm. In spite of the intense pain caused by his wounds, Lieutenant Thomas ordered and directed the dispersion and emplacement of his first two antitank guns. In a few minutes these guns were effectively returning the enemy fire. Realizing that it would be impossible for him to remain in command of the platoon because of his injuries, Lieutenant Thomas then signaled for the platoon commander to join him. Lieutenant Thomas then thoroughly oriented him as to the enemy gun positions, his ammunition status, and the general situation. Although fully cognizant of the probable drastic consequences of not receiving prompt medical attention, Lieutenant Thomas refused evacuation until he felt certain that his junior officer was in full control of the situation. Only then did Lieutenant Thomas allow his evacuation to the rear. Throughout the action, Lieutenant Thomas displayed magnificent personal courage and a complete disregard for his own safety. His extraordinary heroism spurred the soldiers of the platoon to a fierce determination to triumph, and resulted in a mass display of heroism by them. Lieutenant Thomas' intrepid actions throughout the operation reflect the highest traditions of the military service.