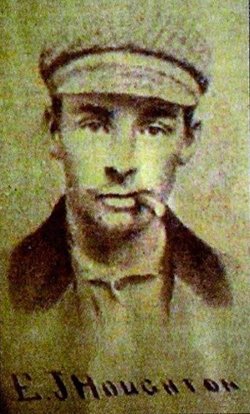 AWARDED FOR ACTIONS
DURING Civil War

The President of the United States of America, in the name of Congress, takes pleasure in presenting the Medal of Honor to Ordinary Seaman Edward J. Houghton, United States Navy, for extraordinary heroism in action while serving on board the U.S. Picket Boat No. 1 in action near Plymouth, North Carolina, 27 October 1864, against the Confederate ram Albemarle, which had resisted repeated attacks by our steamers and had kept a large force of vessels employed in watching her. The picket boat, equipped with a spar torpedo, succeeded in passing the enemy pickets within 20 yards without being discovered and then made for the Albemarle under a full head of steam. Immediately taken under fire by the ram, the small boat plunged on, jumped the log boom which encircled the target and exploded its torpedo under the port bow of the ram. The picket boat was destroyed by enemy fire and almost the entire crew taken prisoner or lost.

Edward Houghton was born in Mobile Alabama in 1843. Edward Houghton, meanwhile, a Union sailor during the Civil War, died in a fight while on leave at age 22, a day before he was to receive the medal