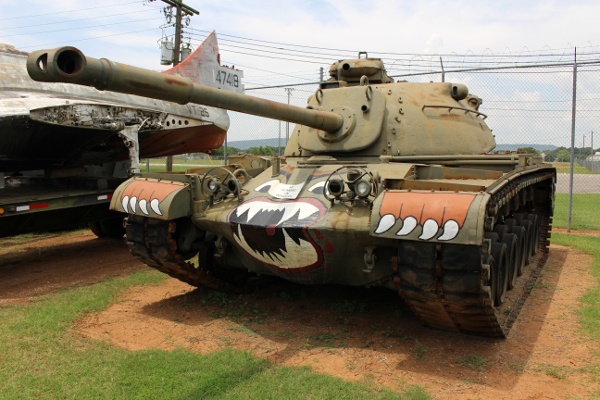 The US M48 Patton Medium Tank entered a rather rushed development during 1952 and entered service in the following year. Despite some resemblance to earlier Patton’s, it was a new vehicle, with a new cast hull and turret. Some 11700+ were built by various companies such as Chrysler, Ford, GMC and Alco with production ending in 1959.  The M48 Patton tank saw service from 1953 through the 1990's.  The M48 models, up until the last model ,  the M48A5, had the 90mm gun.  The M48A5 had the 105mm gun, but the 90mm is similar in appearance.

(from left to right): 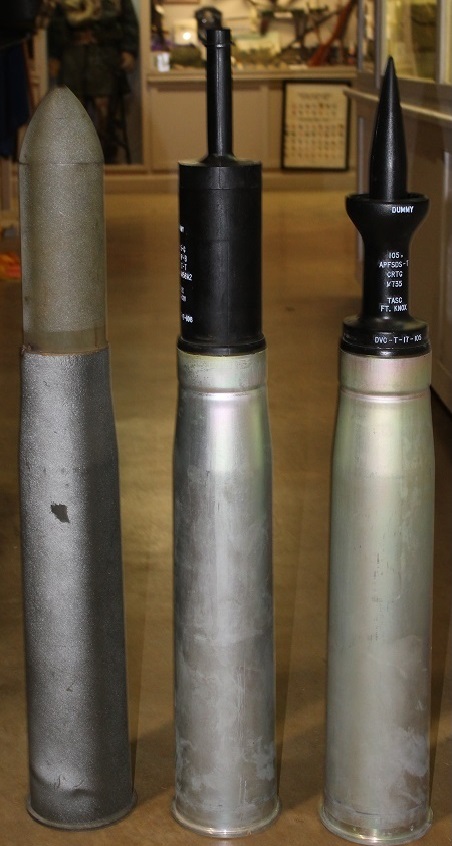 The HEP round was developed by the UK and called HESH (High Explosive, Squash Head) and achieves it lethality by a major pulse on the outer armor, tearing wads of armor “spall” (60-80 pounds) off the inside of the tank at high velocity, destroying everything in it path. The M393A2 cartridge is designed for use against armored targets, light material, and personnel. The payload is 6.6 pounds of Comp A3, a high explosive, plastic composition.

This cartridge is intended for use in M68 105mm guns against armored targets (tanks). The projectile is designed to penetrate tank armor by burning a hole in the armor with a shaped explosive charge.

This cartridge is a high velocity, flat trajectory, discarding Sabot round used in the 105mm gun against armored targets. The sabot is the full caliber carrier for the penetrator.  It responds to the propelling charge to give the penetrator, sticking out of the front of the sabot, a muzzle velocity of 5,000 fps or more.  The sub-caliber penetrator has less drag than a full caliber armor perching round thereby better maintaining the velocity that delivers kinetic energy to the target.  The sabot, having served it purpose, typically disintegrates upon leaving the muzzle. 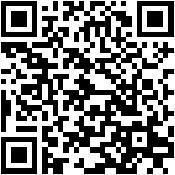